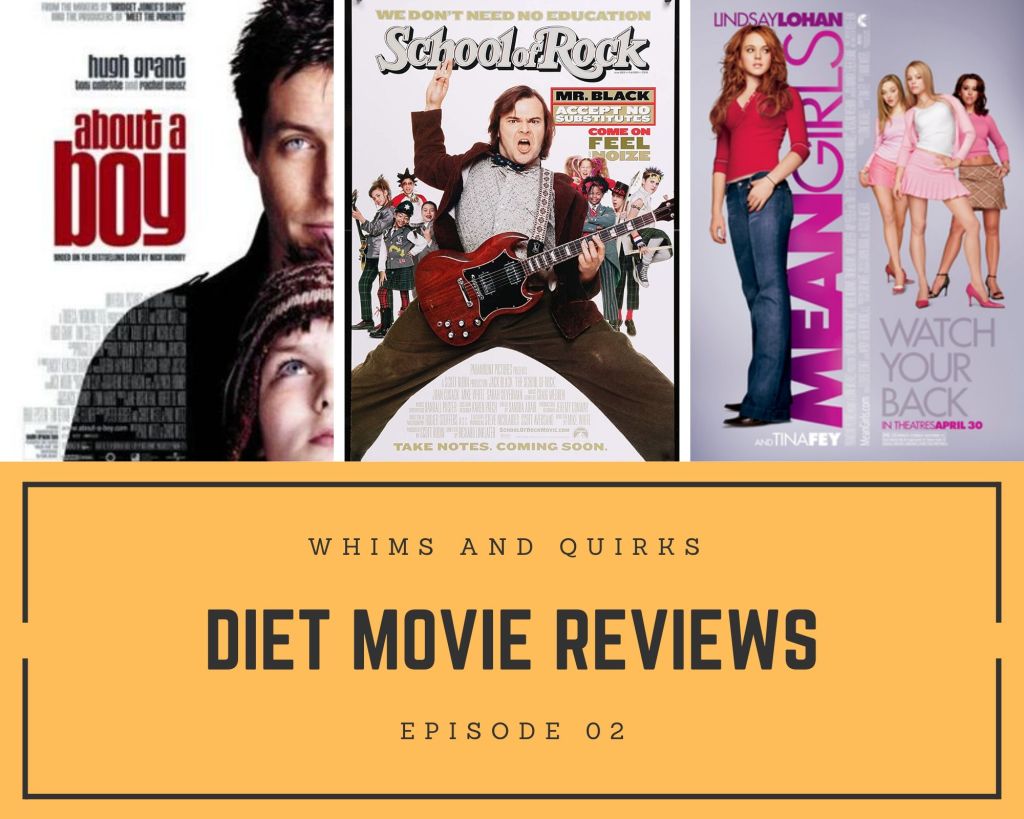 This week on my own version of short movie reviews, I would like to write about three of my most favorite non-Hindi movies. All of these titles, incidentally fall under the coming of age genre, are humorous and most importantly heartwarming and feel good movies. So, here is Whims and Quirks with three of my ‘go-to’ Hollywood movies – ‘About A Boy’, ‘School of Rock’ and ‘Mean Girls’, I watch them whenever I feel empty and low and by the end they leave me full and happy, always.

I am pretty bad when it comes to watching movies at home and hence have not watched many titles from the west. I stumbled upon this gem of a movie starring Hugh Grant and Nicolas Hoult in my hostel back in 2013 out of sheer boredom. And I just fell in love with this story about two strangers who become an important part of each others life without requiring it to be a love story. The story is actually about a strange friendship between Will, a 37 year old bachelor and Marcus, a 12 year old boy who lives with his suicidal mother. Will is a super rich man (being the son of a celebrated singer) and lives off the royalty he gets from his father’s only super hit single, ‘Santa’s Super Sleigh’. He is (in his own words) a shallow man-child who practically watches TV all day, is always on the look out for casual relationships and is pretty unapologetic about everything all through. Marcus on the other hand is a responsible but quirky kid who is often bullied at school but acts as a guardian to his suicidal mother at home. In spite of all the shit going on in his life, he is optimistic and hopeful all through and that is for me the USP of the movie. The rest of the movie is how Will and Marcus hang out and bond while watching gameshows together and find solace in each other.

The screenplay is very well written with some super witty dialogues. The scenes between Will and Marcus strike a chord each time and leave the viewers with a brimming smile. The story is minimalistic and mostly character driven where all conflicts arise within the characters themselves. Hugh Grant is superb with his straight face humour and keeps it subtle all through. His scenes with the women he dates in the movie are super funny. Nicholas Hoult is brilliant as Marcus and makes you empathise with him even though his character never goes over the top. He is adorable. The rest of the cast is adequate.

About A Boy is melancholic yet uplifting, making it one of the most wholesome movies I have seen.

I watched School of Rock for the first time on HBO when I was in 9th grade and totally loved it. The movie is primarily about how a group of elementary school kids discover themselves with the help of their fake class teacher and some authentic rock music. Jack Black plays the fraudulent teacher who forms a rock band consisting of the school kids, hones them and makes them participate in this rock band contest called ‘Battle of Bands’.

This is by far my most favorite film about school kids and connects with me each time I watch it. Jack Black is great as the rock musician turned teacher, and shines in an author backed role. But, for me it is the kids who steal the show left, right and centre. They are all amazing and pitch-perfect. Special shoutout to Miranda Cosgrove who plays Summer Hathaway in the movie, she has limited scenes but excels each time. The story is well nuanced and the screenplay too does not disappoint. The screenplay and dialogues arouse feelings of both hope and despair with equal ease and build up the drama towards the end such that it makes us all cheer for the kids at the Battle of Bands, unequivocally. The super exciting climax is my favorite part of the movie. It’s fantastic and still gives me goosebumps!

The movie also boasts of some great songs intertwined in the narrative as rock music serves as its backdrop. All in all, School of Rock is a great movie experience for everyone.

The third and the final movie in this edition of Diet Movie Reviews is the Lindsay Lohan starrer, Mean Girls. Based on a novel, Queen Bees and Wannabes by Rosalind Wiseman, the movie is a teen flick that showcases how tricky and exhausting it is to deal with high school cliques especially when you are the new kid in school (new meat coming through). Even though the setting is American but the movie is very relatable for high school going kids across geographies and that is also what makes is the most quotable movie of all time.

The screenplay by Tina Fey is super tight with one fantastic dialogue after the other. The entire movie is literally filled with quotes. The pace of the movie is super quick and kudos to the editor for doing a swell job. Also, there is a strong message in the end that addresses teen age bullying adeptly. Lindsay Lohan as Cady Heron, the protagonist, is superb as her character has multiple shades to portray and she handles the complexities very well. Rachel McAdams as Regina George is at her sassy best and is a scene stealer every time she is on screen. She also has some of the best lines in the movie. The rest of the cast is adequate and everyone suits their characters to the T.

More often than not teen movies (especially of the 80s) come across as flimsy or sleazy but Mean Girls is an aberration. (In other words, the movie is totally FETCH! and also GROOL!)

(Disclaimer – I do not own the rights to the images displayed on the page. The rights remain with their rightful owners. The images are sourced from various public online sources to provide references to the above movies.)