Monica Seles is probably the most gifted athlete the world has ever seen. The former world #1 won the first of her 9 grand slam titles at the French Open’1990 at a tender age of 16 years, becoming the youngest French Open Champion in tennis history. She followed her success by winning six out of the eight grand slams in the upcoming two calendar years. Next she won her 8th title at the Australian Open,1993, also completing her hat-trick at the event. Seles was the undisputed queen of Tennis by the end of 1992 and by now had surpassed her closest rival Steffi Graf by leaps and bounds. Her success was phenomenal. She had won 8 grand slam titles before turning 20. She was on her way to becoming the greatest of all time. But the future did not favor her at all. It turned out to be rather dark and grim. In 1993, something unfathomable happened and it shook the entire sporting world. Monica Seles was stabbed in broad daylight, amidst thousands of tennis fans in Germany. An incident of this sort had never been heard of, a player was stabbed and that too while playing her match.

The untoward incident took place on April 30, 1993. Monica Seles was just 19 years, 4 months and 28 days old. She was playing her quarter-final match at an event in Hamburg, Germany. She had won the first set and was leading the second 4-3, when a sick man identified as a “Steffi Graf fan” stabbed her in her back with a 9-inch long knife. Seles was stabbed, in front of thousands and  tennis history changed forever. Seles had to take a sabbatical for 2 years to recuperate, more mentally than physically. She returned to the tennis court and got back to winning almost instantly, reaching the US open finals in 1995 and then winning the Australian open 1996. But that was it. She could not regain the same deadly form she possessed in her pre-stabbing days. She played well until 2003 but did not win another grand slam. She was also constantly fighting body shaming as well in addition to her mental scars left behind because of the stabbing. 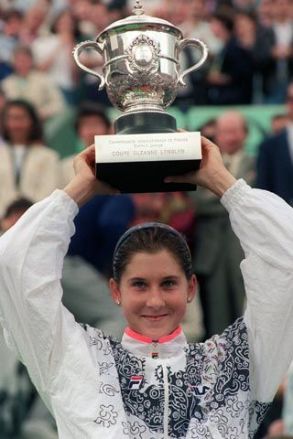 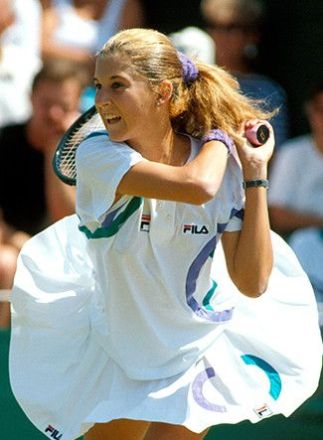 PARIS, FRANCE: Yugoslavian tennis player Monica Seles is all smiles as she holds up the winner’s cup after defeating Germany’s Steffi Graf in three sets (6-2, 3-6, 10-8) in the final of the French Open At Roland-Garros 06 June 1992. Seles is the first woman to win the Frenc Open for the third time consecutively. (Photo credit should read JEAN-LOUP GAUTREAU/AFP/Getty Images)

Today, I find it really interesting that when the whole debate of the greatest of all time, G.O.A.T., takes place only a few take Seles’ name. When we do the aftermath and look at the decline in Seles’ career post stabbing and the rise of Steffi Graf in her absence, I find that Monica Seles could have easily been the greatest and that too by a considerable margin but people fail to acknowledge that. May be because the stabbing incident makes them uncomfortable for the simple fact that Seles was denied of something she deserved without any fault of hers. The incident also raises questions on the revered status of the poster girl of tennis, Steffi Graf. It also poses questions on the security provided to the athletes and negligence of the sports authorities even more so because the tournament was played in Germany, Graf’s home country.

Monica Seles had won 8 out of the 14 grand slams she played before the stabbing took place. Post that she won just 1 out of 26! In between she could not take part in 10 grand slams. Had the incident not taken place, she could have converted a larger chunk if not all. She had the game, she had the power, she had everything tennis history had been waiting for. But then some things are not meant to be. The reality is Monica Seles is only #8 in the all time grand slam singles winners list and Steffi Graf with her 22 titles stands tall at #3. But I don’t want to believe the facts. The facts can lie, in Monica Seles’ case, they so do. I often wonder, what would have been her grand slam tally if she wasn’t stabbed? Alas, no one will ever know. A split second of negligence changed tennis history forever.

(Disclaimer – I do not own the rights to the images displayed on the page. The rights remain with their rightful owners. The images are sourced from various public online sources to provide a reference to Monica Seles.)