Serena Williams – the mere mention of this lady makes me go head over heels. I don’t remember being affected by any other celebrity, or for that matter anyone, the way she has moved me. A successful athlete, businesswoman, fashionista, karaoke singer, dancer – the woman has many facets, each aspect so different from the other. But the single most quality that I find the most fascinating is her ability to break stereotypes. All her life she has broken so many of them and set precedents like no other celebrity. She refused to act in a certain way and has always spoken against prejudices. With that resilience, she has managed to become the most successful singles tennis player in the open era, leaving behind the likes of Steffi Graf, Martina Navratilova, and Chris Evert.

Below are the 7 aspects of Serena Williams’ personality that inspire me.

1) I got to know about Serena for the first time in 2003 when she had just completed her first Serena Slam. She had managed to become this tennis phenomenon not only in America but also in my country India, where Tennis those days was not that celebrated.  I had read an article about her feat and was completely in awe of her accomplishment. So much so that I made sure that I tuned into her French Open 2003 semi-finals match vs Justine Henin on Doordarshan. Though she lost that match, her first loss after 4 grand slams, I became her fan for life. This was the very match up, infamous for Henin’s controversial hand incident. Serena avenged the loss at Wimbledon that very year but after that took a sabbatical. Henin meanwhile rose to the top in Serena’s absence. Serena struggled at slams in 2004 (reaching quarters nevertheless) and so did  Henin. This was the phase where the Russians gained prominence in the WTA tour. But what thrilled me the most was the simple fact that at all three grand slams in 2004 (Serena did not play the Australian Open 2004), Serena Williams was the player to beat. As a matter of fact, ever since the Serena Slam 1.0, she had been the player to beat at all the tournaments she entered in. And that explains her dominance and super stardom. It has been 13 years since and Serena Williams is still the player to beat. No athlete ever I guess has enjoyed this longevity and dominance both at the same time. Also, Serena has a unique ability to win from almost nowhere. My favorite anecdote is the Australian Open 2007’s win where Serena was unseeded and came in as the world number # 81. Despite this, the manner in which she thrashed Maria Sharapova in the final is remarkable.

2) The Williams sisters can be credited for popularizing diversity in tennis. Serena Williams has achieved unprecedented success in Tennis, a sport mainly played by the “White” population. Her super success has broken that mindset forever now. She along with her sister Venus Williams has made way for athletes in Tennis who are not necessarily White, which is amazing. Their contribution in this respect can never be forgotten. They made everyone realize that tennis is accessible to one and all.

3) Serena Williams can also be credited with bringing “Drama” back into the tennis courts. Tennis all of a sudden became interesting. Such is her passion for winning each and every match she plays. Serena Williams hates to lose and that shows in all her matches. Remember the infamous US open 2004 quarters vs Jennifer Capriati? Or the US Open Semis vs Kim Clijsters? I guess this very passion for winning has fuelled her to win those 23 singles titles. “The Drama” sets her apart from the rest of the calm and composed players.  It makes her all the more interesting and appealing. Add to that her wit and humor. Serena Williams’ interviews and winning speeches are some of the best ones ever. So articulate each time. 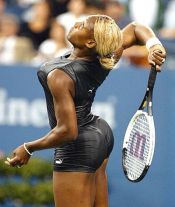 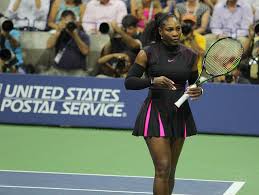 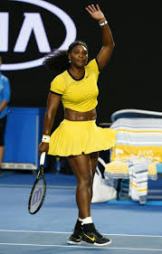 4) Serena Williams has taught the world to love the skin they are in. The way she has handled her body shamers, is inspiring. She made strong the new beautiful. She broke all gender stereotypes, setting an example that women can also be strong and powerful. Moreover, her fashionista image on and off the court always corroborated the fact that strong is the new sexy. Her catsuit, the denim skirt with the boots, the crop top – she made a fashion statement each time. Her dress at Wimbledon 2016 has to be the best tennis outfit ever. Also, the way she styled herself for the VMAs 2016 was so elegant. Serena will always be the fashion diva of the tennis world.

5) An athlete’s career hardly continues in their 30s. Contrary to this belief, Serena dominates the sport now in her mid-30s. She has won 10 of her 23 slams post her 30th, which is astonishing. She is still going strong and can improve her tally in future. I strongly believe that one of the reasons for her longevity is her being selective and giving priority to the slams. She played less than her contemporaries on the tour but made sure each time she played she went for the win. Everyone barring Venus, who started with her is nowhere to be seen. Though Venus is around but she could never be as consistent as her younger sister.

6) Another inspiring aspect of Serena’s life is the benign causes she is associated with. Her charity fund, called the Serena Williams Fund, has two main goals – 1) To create equity through education and 2) assisting victims of senseless violence. The causes she stands for are the ones I resonate the most with. I believe she is working towards a better world to live in. Her schools in Africa are a testament of that. More power to her backing such causes.

7) And lastly, I love the way Serena Williams has maintained her prominence in the pop culture world. The appearances she makes off the court, her friendships, her relationships, her twerking, her karaoke nights, her dude perfect trick shots, her social media endeavours, her interviews, her on the court outbursts, her ever changing style everything makes headlines. I love the way she flaunts everything. Even the queen of American pop culture, Beyonce Knowles, is inspired by her. She cast Serena in her lemonade video and also invited her to the VMAs to introduce her. When Serena Williams is around even ‘queen B’ sits up and takes notice.After all, there is no one like Serena. Serena is special.

I would like to conclude this post with the below Serena Williams quote from her speech at the Sports Illustrated Sportsperson of the year ceremony. These lines capture her struggle to the top and have the power to motivate and inspire anybody.

(Disclaimer – I do not own the rights to the images displayed on the page. The rights remain with their rightful owners. The images are sourced from various public online sources to provide a reference to Serena Williams. )